Wisdom’s Righteous Man as James’ Example of Suffering and Vindication

This conversation started on Rodney’s post, here. I thought that I might give a fuller explanation of my thoughts here.

As many of you know, I believe in Wisdom Christology, finding in it the most able and biblical understanding of the nature of Christ. It is historical and historically associated with primitive Christianity. Through this lens, I admit, I generally read the New Testament documents. One of the earliest is the Epistle of James. Contrary to popular and wrong opinion, it is written by a real brother of Jesus – not a cousin or step-brother. James is writing in the Wisdom Tradition, much like that which his Brother stood in earlier.

In Chapter 5, James starts with a edification towards to suffering, justice and warning against injustice to those outside the audience. In doing so, James appeals to a tradition which would have been known to the community to which he was writing. It is only normal to think that when someone is writing, they would use language which would be understood. James’ community is still very much Jewish and associated with the Temple and the Pharisee sect which is the progenitor of the Wisdom Corpus (Wisdom, Sirach, Psalms of Solomon, etc…). James writes, 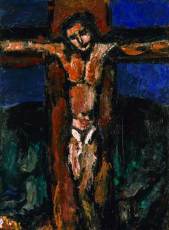 Come now, you rich people, weep and wail for the miseries that are coming to you. Your riches have rotted, and your clothes are moth-eaten. Your gold and silver have rusted, and their rust will be evidence against you, and it will eat your flesh like fire. You have laid up treasure for the last days.

Listen! The wages of the laborers who mowed your fields, which you kept back by fraud, cry out, and the cries of the harvesters have reached the ears of the Lord of hosts. You have lived on the earth in luxury and in pleasure; you have fattened your hearts in a day of slaughter.

You have condemned and murdered the righteous one, who does not resist you.

Be patient, therefore, beloved, until the coming of the Lord. The farmer waits for the precious crop from the earth, being patient with it until it receives the early and the late rains. You also must be patient. Strengthen your hearts, for the coming of the Lord is near. (James 5:1-8 NRSV)

If you read further into the chapter, James goes on to command that we use the prophets as our examples in suffering. There is then no doubt that this passage is about a Sufferer and to be used to push the community into a different understanding of suffering.

For a better comparison, read Wisdom 2-6 and compare it to first to the life of Christ and then to this passage in James. The ‘rich people’ can be identified with those who stand against the Righteous Man (or the righteous (pl) as the Greek shifts in Wisdom) and eventually kill him/them. In Wisdom 2.6-7, they are identified with fatalists, those who see their life as the totality of their existence, and insist on living like there is no Tomorrow: 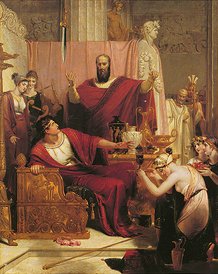 For our allotted time is the passing of a shadow, and there is no return from our death, because it is sealed up and no one turns back.

“Come, therefore, let us enjoy the good things that exist, and make use of the creation to the full as in youth. Let us take our fill of costly wine and perfumes, and let no flower of spring pass us by. Let us crown ourselves with rosebuds before they wither. Let none of us fail to share in our revelry; everywhere let us leave signs of enjoyment, because this is our portion, and this our lot. Let us oppress the righteous poor man; let us not spare the widow or regard the gray hairs of the aged.” (Wis 2:5-10)

What is their intention, but to use their wealth to oppress the poor Righteous Man (reading further, you will find out who the poor Righteous Man says that he is). They do not see an End, but only an end to their short vapor of life (Wis 2.1-5), so for them, happiness is the greatest reward. They go one to inflict damage upon the Righteous, mocking him, and will eventually kill him:

Let us see if his words are true, and let us test what will happen at the end of his life; for if the righteous man is God’s child, he will help him, and will deliver him from the hand of his adversaries. Let us test him with insult and torture, so that we may find out how gentle he is, and make trial of his forbearance. Let us condemn him to a shameful death, for, according to what he says, he will be protected.” (Wis 2:17-20)

It only after the Vindication of the Righteous Man that the rich repent and then seek to be counted among the divine children:

Then the righteous will stand with great confidence in the presence of those who have oppressed them and those who make light of their labors. When the unrighteous see them, they will be shaken with dreadful fear, and they will be amazed at the unexpected salvation of the righteous. They will speak to one another in repentance, and in anguish of spirit they will groan, and say,

“These are persons whom we once held in derision and made a byword of reproach– fools that we were! We thought that their lives were madness and that their end was without honor. Why have they been numbered among the children of God? And why is their lot among the saints? So it was we who strayed from the way of truth, and the light of righteousness did not shine on us, and the sun did not rise upon us. We took our fill of the paths of lawlessness and destruction, and we journeyed through trackless deserts, but the way of the Lord we have not known. What has our arrogance profited us? And what good has our boasted wealth brought us? (Wis 5:1-8)

But the righteous live forever, and their reward is with the Lord; the Most High takes care of them. Therefore they will receive a glorious crown and a beautiful diadem from the hand of the Lord, because with his right hand he will cover them, and with his arm he will shield them. (Wis 5:15-16)

Listen therefore, O kings, and understand; learn, O judges of the ends of the earth. Give ear, you that rule over multitudes, and boast of many nations. For your dominion was given you from the Lord, and your sovereignty from the Most High; he will search out your works and inquire into your plans. Because as servants of his kingdom you did not rule rightly, or keep the law, or walk according to the purpose of God, he will come upon you terribly and swiftly, because severe judgment falls on those in high places.

For the lowliest may be pardoned in mercy, but the mighty will be mightily tested. For the Lord of all will not stand in awe of anyone, or show deference to greatness; because he himself made both small and great, and he takes thought for all alike. But a strict inquiry is in store for the mighty. To you then, O monarchs, my words are directed, so that you may learn wisdom and not transgress.
For they will be made holy who observe holy things in holiness, and those who have been taught them will find a defense. (Wis 6:1-10)

James is using the Wisdom literature to buffet those who are suffering, reminding them in but a few short sentences, that while the community must suffer injustice, the Righteous One suffered as well by the hands of the same people. In doing so, he draws a comparison in the minds of the suffering to the One Who Suffered before, which is where the Righteous Man comes in at. In Wisdom, the Righteous Man switches from singular to plural (note chapter 2 of Wisdom then with Wisdom 3.1). James as well.

I note that later in James, the author again compels the community to be like the Righteous Man –

Therefore confess your sins to one another, and pray for one another, so that you may be healed. The prayer of the righteous is powerful and effective. (Jam 5:16)

There is more than a brief allusionary thought between James and Wisdom, but a firm foundation upon which to see Christ and the present suffering of the community.

I am using the NRSV because it includes the Deuterocanon.

Wisdom of Solomon is Against Carrier’s Eschatological Isaiah 53