Who I saw at Church on Sunday 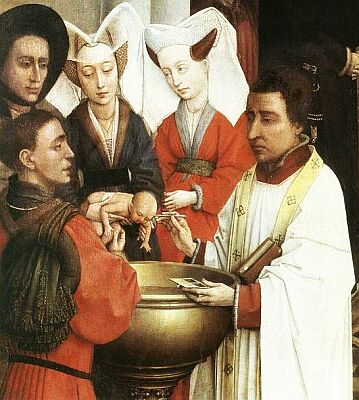 We had a baptism at church on Sunday. We’ve had those before. But this time, what struck me was the obedience of the parents. They no doubt could provide their children with anything that the children could ever ask for, but they chose instead to give them what so many children lack – a Christian Foundation.

I saw two parents surrounded by their parents, friends and some siblings. I didn’t know the parents, but I’ve seen them a time or two, but the sibling I do know. She is there nearly every Sunday with her own children, and participates in the congregation, something I personally value. Anyway, as we said our baptismal values to the young girl, and went through the Apostles’ Creed, I was struck at the absolute value which these vows have, or perhaps should have. I and a few hundred were there that day when a child became a child of God. We were invited into the birthing room, so to speak, and allowed to witness a family occasion like no other.

I get emotional at baptisms and the Eucharist, I guess. And throughout the liturgy as well because these things bind the congregation together, through the generations. I saw the father, of whom I know not of the spiritual condition, standing near the end of service, by himself at the back of the church, his wife attending to the children outside the sanctuary, saying the prayers and the doxology which we were saying.

Who did I see? Two wonderful parents who sought to break with most of their friends and surrender their child to Christ. There is nearly no finer sight.

Being an agent of hope in a pain filled world.

He took our punishment – an example.

One Reply to “Who I saw at Church on Sunday”