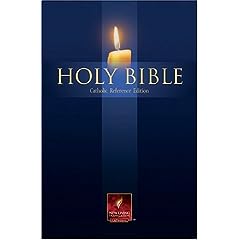 As many of readers may suspect, I greatly enjoy the New Living Translation and I make use of the Deuterocanonical books in certain aspects of my studies and in daily readings. Recently, I purchased a copy of what Tyndale billed as the Catholic Reference Edition (I’ll call it NLT:C), which was geared towards Catholics.

No, I’m not a Catholic, but like the wide majority of people who claim the name of Christ, I like the Deuterocanon/Apocrypha for various reason. (The Anglicans, Protestants for now, actually use it in their liturgy.) For me, I have yet to fathom a 400 year span in which God was silent, so reading some of the books currently hidden, is refreshing and indeed, adds greatly to the New Testament.

Back to this edition of the NLT. It is still sold, in some places, and on line, but it didn’t meet with praise from the Catholic Church. Nor was it given approval by either Rome or the U.S. Catholic Bishops, which is needed in Catholicism. This lack of approval no doubt contributed to the lack of acceptance of this edition.

Of course, so did calling it ‘Catholic.’

Let’s me honest, it is difficult for Evangelicals, which is what the NLT is geared to, to pick up something called ‘Catholic’ and since it didn’t have official Catholic approval, few Catholics picked it up as well. They both missed out on a solid translation of the Deuterocanonical books. (I’ll post examples later). Can something, should something, be done about?

I hope that Tyndale will, based on the success of the Mosaic, see that it is a good thing to reach across the traditional audience of Tyndale to a greater worldwide audience and as Rick Mansfield has noted, contrary to popular opinion, Tyndale is serious about the NLT as a scholarly translation.

As I pointed out in my “Rise” post, the creation of an NLT-dedicated commentary series such as the Cornerstone Biblical Commentary series, the tying of the translation to the original languages through the newly formulated “Tyndale Strong’s Numbering System,” and the publication of an NLT Study Bible at least on par with–if not slightly more academic than–the standard NIV Study Bible, all point to Tyndale’s repositioning of its flagship translation as a translation intended to be taken very seriously.

The link to the Tyndale Strong’s Numbering System in the paragraph above will take you to a post on the NLT blog asking if the NLT, as a dynamic translation, is suitable for word studies. The newest post on the NLT Study Bible Blog asks “The NLT: Good for Study?”

If you haven’t already guessed–YES, Tyndale is serious about this.

One of the ways to widen the reach of the NLT, and to make it more scholarly, is to include the Deuterocanon. In a weekend conversation with a fellow blogger in which I was describing this post, I asked about an ‘ecumenical’ NLT and if it would be beneficial,

Sure. The NLT as a ‘dynamic equivalence’ should lend itself naturally towards ecumenical thinking. The thing that gets Catholic backs up is bias (Reformational) in translation. The New American Bible has thus solidified itself as a translation of choice. There are one or two others that enjoy approval (Nihil Obstat) (eg RSV CE, New Jerusalem). I have seen the old Good News (with Deuterocanonical books) and the CEV used too. It might work, though your Reformed lot will reject it (shortsightedly) and may even rubbish the whole idea (the ESV is the new KJV I’m afarid). So that puts you in between the proverbial rock and a hard place. Target audience? Anglicans, Methodists (perhaps), and Orthodox. Catholics (hopefully) though, can’t say. The rest (Protestant Churches / Pentecostals ect.) highly unlikely. Still, might be worth a try (and suggestion)… Though, as in all good things, expect some opposition my friend…

The NRSV has an ecumenical version which includes the books of the Western and Eastern Canons. (I would like to see an inclusion of the Psalms of Solomon of course). Further, an ecumenical NLT (instead of a ‘Catholic’ Version) would be more compatible across the denominational spectrum and help to show that the NLT is scholarly and liturgical.

Regarding the Greek text of the Deuterocanon to be used? I like that which is available in the New English Translation of the Septuagint (Rahlf’s), which is close to what the KJV translators used in 1611. While the footnotes in the NLT:C include the ‘missing’ verses, it is entirely possible to elevate them into the text and bracket them.

According the Bible Study Magazine, the exclusion of the Deuterocanon is almost a uniquely American idea.

The bibles used by many European Protestants, as well as the Anglican Church, still include the Apocrypha. Most other English-speaking Protestant churches have bibles without the Apocrypha.

So, if Tyndale wants to broaden the reach into more hands and scholarly circles, why not an Ecumenical NLT?

First, Tyndale needs to correct the Protestant Myth of the Council of Trent (found in the introduction). Further, remove the listing of Popes, but perhaps include a listing of Saints common to the West, East and Protestantism, such Chrysostom, Ignatius, Polycarp. They could also include Augustine, Cassian, Francis and others that might not be widely held. Also Luther, Calvin and Zwingli. Frankly, if they focused only on the translation and removed everything else, I would be okay.

In the end, Tyndale needs to move beyond segmented Christianity and show that the New Living Translation deserves a place in the Christendom, in Scholarly applications, and in Liturgical Use.

I have the hard cover of the Catholic Reference Edition, and I am already missing the leather bound type. The binding is cracked (yes, I bought it used) and cracks more and more. This has nothing to do with the quality of printing, but a sad fact of hard cover bibles. The Deuterocanonical books are set according to the Catholic Canon – which might have to be changed, and like Protestant Bibles, separated. There are cross references inside and out of the DC books which provides some ability to actually measure the DC books against those of the Common Canon. (Even the KJV 1611 had these). Like most NLT’s, the DC books have section headings. The introductions are not as conservative as you will find in the rest of the bible, but they are not expected to be.

The DC books were translated by Philip Comfort, J. Julius Scott, and James A. Swanson. They are very much in line with the translation styles of the 1996 edition of the NLT (which is what the Catholic Reference Edition comes in). Some of this might need updating, of course, to make it more in line with the translation style of the 2007 edition, which is more literal. Further, more cross references, if possible (no need to stretch them, as their are plenty), located in the DC books to the rest of the test.

Part of the goal should be to great a liturgical-like atmosphere, perhaps including, as William Tyndale did in his 1534 New Testament, a liturgical calender. Even he used the DC books, which of course, gave way to the present day use by the Anglican Communion. While adding a Liturgy for every Faith Community would be nearly impossible, I would suggest selecting two or three.

I am obviously mixing scholarly and ecumenical, but I cannot get around it. The NLT, as the commentator noted above, should be a natural for ecumenical dialogue, but there is a need to up the ante a bit.

This will be followed by two more posts – Psalms 151 in Dynamic Equivalence and Examples of the NLT:C Deuterocanon.

My NLT has more miracles than your KJV