The Two Accounts of Creation in Genesis – Bibliobloggers Arise! 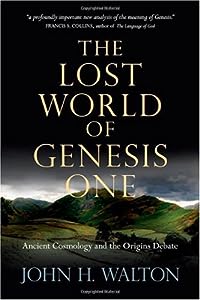 Seems that Creationism is making the rounds again. First, check out summaries of latest posts here and here. But, I want you to check out Dr. Brady’s post on Genesis 3 and the implications of an extremely literal reading of that portion. Here is the paradox for many, just as in reading Genesis 1 and 2. If you take Genesis 3 literally, then Adam didn’t die that day, but if you take it as the story of the imputation of death, then yes, Adam died. Adam dies the same day only after theological reconstruction of the story has taken place.

In Genesis 2, we read of a separate account of Creation, one which is vastly different than what we have in Genesis 1. Again, from a  rough draft in discussing Creation in my Old Testament class –

The first Creation account in Genesis (Gen. 1.1-2.3) is given in a liturgical style, perhaps as John Walton points out (The Lost World of Genesis One) as a Temple hymn sung during certain times of the year. It begins with the ancient chaos, out of which God is introduced as the One Who is in the midst of creating. It is not so abrupt a start in the Hebrew as the older translations give us, but one in which God is seen as creating and seemingly pauses to bring forth Creation, at least that part of the physical world in which humanity thrives. In hymnody fashion, God is seen as assigning order to the chaos of the primordial seas (which is later declared to be a violent act in Psalm 74.12-17 and Job 26.12-14) as well as building the creation to a point where humanity is the zenith, the crowning jewel, and certainly not accidental. This motif is certainly one found throughout Genesis in which by the end of the book, we have a singular family with the promise from God, and one among them who had the birthright. Genesis 1 shows a path of God’s work to bring about humanity while bringing forth first those things which humanity would need. Then, suddenly, the creation is complete; God assumes His position in the Temple of the Earth, blessing that Day, and then resting. Of course, unlike the other days, there is no evening or morning on the seventh day which would become important to theologians such as Augustine.

The second Creation account is found in Genesis 2.4-25. In this, we find the broad use of Day as is later used by the Prophets in describing the coming Day of the Lord. It is a timeless Day, although using the same concise word as found in the previous account. It was in this Day that God made a man first before His other creatures. No plant had yet been formed when God reached down and using the dust of the ground, began to form that man, finally giving to him the divine breath. It was then, unlike the first account wherein plant life came forward. Because of that man’s loneliness, God formed the animals; nevertheless, finding that that didn’t work, God caused that man to fall asleep and from the side of the man, a woman was made which would become that man’s wife.

In the first, the majesty of God is revealed as One Who was creating when the heaven and the earth came to be, bringing these things about on purpose. God refers to His divine Counsel (perhaps His Word and Wisdom as later theologians would come to see, or the sons of God as described in Job) when creating the race, calling for humanity to be in the imago dei. Further, after each step in the first account, God affirms the goodness of each created object and later gives all of Created Order to Humanity to rule and govern. In the second account, while humanity is still the central figure, everything is made for the man, but only after the man needs it. Even the vocabulary is different, from naming the first man to the even giving God a name (from אֱלֹהִ֑ים  in Gen 1:1, to יְהוָ֥ה אֱלֹהִ֖ים in Gen 2:4). Further, the act of Creation is no longer described as בָּרָ֣א  (Gen 1:1) but עֲשׂ֛וֹת (Gen 2:4). With that, what remains is the largest difference in which we see – that no longer is Humanity created in an androgynous fashion, but the man first and then the woman only to serve as a helper to the man.

While certainly, the readings should be read together as they are placed next to each other, to read them as many do today in the style of the poetic device of parallelism as found in the Prophets and the is to destroy sound, and original theology, I believe. First, we have the purpose and order which can gain from the first account in which God, in a very liturgical style, builds Creation up to a point, declares everything good and finally, when it is all done, sets humanity above all things while He finds rest in the cosmic temple. While in the second, God takes the time to build the things according to humanity’s needs, first with the divine spark which separates the human race from all other created things. Then, when food and companionship, ending with the very thing which makes us thrive – love. Both relate the same theology, in that all of creation is for and because of humanity, that God did these things, and that they are well ordered and serve a purpose. In both, God’s sovereignty is easily seen, but in the second, so too His immanence which is contrasted to the booming, but distant voice of God as found in the first (‘and God said’ compared with ‘and God did’). Further, in the first account, we find that God establishes society between men and women and gives to them both the charge to rule and govern the earth. For Philo, this division of male and female would be a sign of equality (QGe 2.56; Her 1.156).

So, how do you explain the difference between Genesis 1 and Genesis 2’s creation account?

Cargill on that Peculiar Flood In Genesis 6-9

12 Replies to “The Two Accounts of Creation in Genesis – Bibliobloggers Arise!”