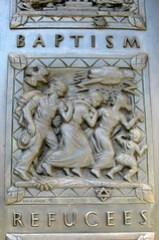 “Children born of believing parents are children of God, like those who were born under the Old Testament, and consequently may receive baptism.

“We cannot prove the custom of re-baptizing either by examples, texts, or arguments drawn from Scripture; and those who are re-baptized crucify Jesus Christ afresh.” (from here)

“The Hebrew children were all baptized in the cloud and in the sea, just as are ours.  Paul, in the passage cited, tends in no other direction than to prove that they are as much initiated by our sacraments as we ourselves.  It follows therefore, first, that in Paul’s time it was the custom of the apostles to baptize infants; second, if anyone contradicts it he vitiates the opinion of Paul.”

Orthodoxy as Primary to Morality

Infant Baptism in the Church Fathers

5 Replies to “The Question of Infant Baptism: Zwingli’s View”