The Question of Infant Baptism: John Calvin on Circumcision and Baptism 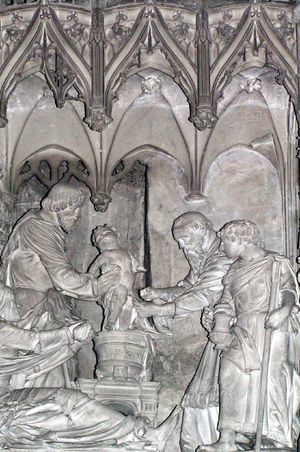 11. Certainly, if circumcision was a literal sign, the same view must be taken of baptism, since, in the second chapter to the Colossians, the apostle makes the one to be not a whit more spiritual than the other. For he says that in Christ we “are circumcised with the circumcision made without hands, in putting off the body of the sins of the flesh, by the circumcision of Christ.” In explanation of his sentiment he immediately adds, that we are “buried with him in baptism.” What do these words mean, but just that the truth and completion of baptism is the truth and completion of circumcision, since they represent one thing? For his object is to show that baptism is the same thing to Christians that circumcision formerly was to the Jews. Now, since we have already clearly shown that the promises of both signs, and the mysteries which are represented by them, agree, we shall not dwell on the point longer at present. I would only remind believers to reflect, without anything being said by me, whether that is to be regarded as an earthly and literal sign, which has nothing heavenly or spiritual under it. But lest they should blind the simple with their smoke, we shall, in passing, dispose of one objection by which they cloak this most impudent falsehood. It is absolutely certain that the original promises comprehending the covenant which God made with the Israelites under the old dispensation were spiritual, and had reference to eternal life, and were, of course, in like manner spiritually received by the fathers, that they might thence entertain a sure hope of immortality, and aspire to it with their whole soul. Meanwhile, we are far from denying that he testified his kindness to them by carnal and earthly blessings; though we hold that by these the hope of spiritual promises was confirmed. In this manner, when he promised eternal blessedness to his servant Abraham, he, in order to place a manifest indication of favour before his eye, added the promise of possession of the land of Canaan. In the same way we should understand all the terrestrial promises which were given to the Jewish nation, the spiritual promise, as the head to which the others bore reference, always holding the first place. Having handled this subject fully when treating of the difference between the old and the hew dispensations, I now only glance at it. (From the Institutes)

There is so much good theology here, that it is better to simply let it stand, adding nothing to it.

One Reply to “The Question of Infant Baptism: John Calvin on Circumcision and Baptism”