Review: The Word of Promise Next Generation – New Testament 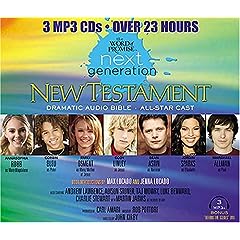 After receiving Word of Promise Next Generation New Testament MP3 Set from Thomas Nelson, being disappointed and bored by each, I decided to let my children listen to this audio Bible. I thought that this one being dramatized by popular youth would be a bit more captivating. I was not entirely wrong on that assumption.

This dramatic audio Bible is voiced by an “all-star cast”. Several of the faces on the CD cover were recognized by my children. This did peak their interest at first. We began listening and these discs are much more able to keep your interest since the voices are different and there is also background noises/music. And they were listening and even asked a few questions.

The production itself is no more than “okay”. The voices all seem to be subdued and calm. I’d like to think if I was face to face with Jesus Christ I would be more emotional. So, a little more drama would have been nice. Also, the young man doing the voice of Jesus, Cody Linley, pretty much whispered through the entire thing. I think he was trying to be very mild mannered, loving and kind, but came across as dispassionate and sappy.

However, in comparison to the narrated versions of the Bible, with no dramatization, this is a huge step up. My kids were able to listen to a couple of chapters at a time before wanting to move on to other things. I’d recommend this to other families looking for a way to get their kids to listen to the Bible and enjoy hearing God’s word.

If you were going to get this for someone older, don’t; however for children of the Sunday School age (Tween on down), then it will really serve the purpose.

Is Diehl correct? (Jesus is Lord, Caesar is Not @ivpacademic)

quote of the day – Anthony Le Donne and Salome