Revelation Illustrated – The Throne Room and the Heavenly Council

My interest in examining Revelation as a Christian legitimization/enthronement of Christ as Deity  is not waning. I want to spend some time on it, and will so later, but for now, I wanted to share this image with you. 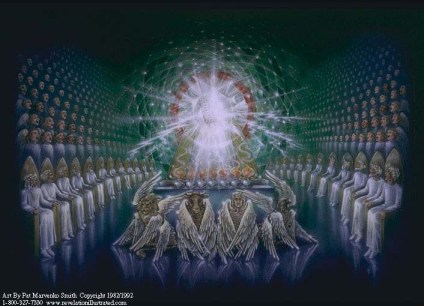 (HT – James McGrath. <–You can find lots of links for the study of Revelation, academically speaking, there)

The image is from Revelation 4,

The one sitting on the throne was as brilliant as gemstones– like jasper and carnelian. And the glow of an emerald circled his throne like a rainbow. Twenty-four thrones surrounded him, and twenty-four elders sat on them. They were all clothed in white and had gold crowns on their heads. From the throne came flashes of lightning and the rumble of thunder. And in front of the throne were seven torches with burning flames. This is the sevenfold Spirit of God. In front of the throne was a shiny sea of glass, sparkling like crystal.In the center and around the throne were four living beings, each covered with eyes, front and back. The first of these living beings was like a lion; the second was like an ox; the third had a human face; and the fourth was like an eagle in flight. Each of these living beings had six wings, and their wings were covered all over with eyes, inside and out. Day after day and night after night they keep on saying, “Holy, holy, holy is the Lord God, the Almighty– the one who always was, who is, and who is still to come.” (Rev 4:3-8 NLT)

But, it calls to mind the Psalmist who wrote,

A God greatly feared in the council of the holy ones, And awesome above all those who are around Him? (Psalm 89.7 NASB)

The highest angelic powers stand in awe of God. He is far more awesome than all who surround his throne. (Psalm 89.7 NLT)

I note that the 89th Psalm is also considered an enthronement Psalm, connected to the 2nd Psalm in thought and imagery, and eventually finding a home in John’s Apocalypse. If we could remove the prophetic fervor of Revelation, and get to the view points being expressed in it, from the social to the political to the theological, I believe then we would have the proper method in understanding its eschatological framework.

In the mail: A revealing book from Wipf and Stock

Thoughts on From Every People and Nation, Reading Revelation Interculturally