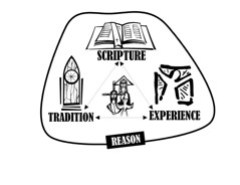 First, Dr. Enns is an excellent resource. Second, John Wesley came straight from the Apostles. He is tackling a broad swath here in regards to how theology is formed and where the ability to understand and allow for science fits in.

With that in mind, whereas a core element of the Calvinist tradition is what I call an incarnational approach to Scripture, the broader Wesleyan dimension that I would like to draw upon is, not surprisingly, the so-called Wesleyan Quadrilateral (so-called because the term did not originate with John or Charles Wesley but only in the last century).

The quadrilateral is a means of describing (rather than prescribing) how one arrives at theological knowledge. I have always found this dimension of Wesleyanism to be bristling with commonsense in that it recognizes the unavoidable interplay between four factors: Scripture, Tradition, Reason, and Experience. (The Anglican tradition speaks of the first three only, but it is clear that Experience is subsumed under discussions of Tradition and Reason.)

Evolution and Our Theological Traditions: Wesleyanism, Part 1 | The BioLogos Forum.

He goes on to write,

….the Wesleyan tradition seems to embrace: Scripture, although holding a place of primary importance, is never understood in a vacuum, insulated from the cultural context of the interpreter….

Of an interesting note is Enns’ approach to both Wesleyanism and Calvinism and his ability to showcase both in a positive light, along side one another. Anyway, after completing a series on Calvinism, he is starting a series on Wesley and how his theological construct views Scripture and the such.

What? Rocks older than the sun found in solar system @AiG

William Abraham on the Importance of Doctrine #UMC

It is nearly impossible for an atheist to exist… or science writers for that matter. #science