Peculiarities of the Appalachia Hermeneutic: Snake-handling and Literalism

The passage in question, as we discuss the Appalachian Hermeneutic, is found in Mark 16.18, the longer ending, 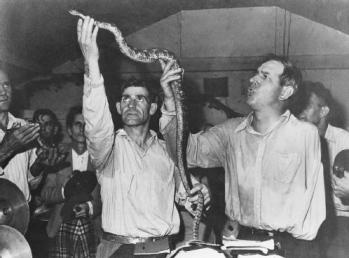 To the preacher, if you do not take literally the ‘command’ in Mark 16.18, then you simply do not believe God. No context is needed, and certainly no textual criticism. Granted, to combat the phenomenon, people turned to Scripture, citing the passages where Christ called the Pharisees serpents. To this preacher, however, the bible seemingly must be read only line after line, in order, with no need for context, scriptural or otherwise. Scripture is, quite simply, God. Notice later, the pastor tying literalism to salvation. (1.30)

The video comes from a church service, recorded for posterity in the late 70’s for the Library of Congress. It is in Jolo, West Virginia, an area know for snake-handlers, even today. The music is loud, and reminiscent of the vile rock-n-roll which is preached against for the beat which engenders devilish acts, and absent the snakes, one can see nothing but a normal pentecostal service. But, what came first? The snakes or the Spirit? While Pentecostalism started in earnest in the early 20th century, snake handling appeared in the Appalachians in the 40’s/50’s and is now outlawed in every state except West Virginia.

This is the former pastor of that congregation,

This is not limited to West Virginia, but is still found in places such as northern Alabama,

The next video is from a longer documentary, but provides some history snake handling in Appalachia.

The focus on extreme literalism, which is common place among preachers and congregants who read the bible as ‘face value’, flat, and seeing the canon, and indeed each verse, as a succession of thought which must be followed accordingly. It is not enough to say that their interpretation of Mark 16.18 is just ‘bad interpretation’; indeed, it is very good interpretation based on their hermeneutic model. Snake handlers avoid any sort of criticism, as textual criticism would challenge Mark 16.18, or context, as context might reveal that the serpents are more than reptiles. Further, their preachers are often simply educated by reading the bible itself, in the King’s English, and would challenge anyone who would attempt to show them that they are wrong based on anything. To them, literalism is associated with salvation. The Scripture is the word in John 1.1 and to question the literalist interpretation is to question God Himself.

On the way to Lake Summersville is a small, ramshackle building, a holiness church, to the side of the road. It serves a home as well, no doubt for the minister. It is  snake-handling church, composed of but a few older people. Close to us, is an apostolic pastor (oneness), a coal miners, who practices snake-handling, and has been bitten a good many times. The practice is not dead, although dying. It is often an embarrassing plight among other small fundamentalist ministers, and must are quick to repudiate snake-handlers, however, they often have dealt with snake-handling themselves.

One congregation at a small fundamentalist congregation in Ohley, West Virginia had a chance meeting with snake-handlers two decades ago. The group come in on a Sunday morning service in heavy clothes, and sitting on the back pew, kept to themselves. It is not uncommon to find service hoppers, where a group will pick a church to visit, to enlighten that congregation to the one true way. This morning, the pastor of the congregation, a man whom I have been told was a holiness preacher and good character, ethical, and fair – unlike his successor – begin to watch the group and the service came alive. Suddenly, he noticed that around the waist of a few of those visitors, things started to move. The group was hiding snakes, wrapped around their waist. The pastor told them to leave immediately.

Snake-handling is very much a by-product of extreme literalism and the revivalism which came to the region over a half-century ago. It is built upon the predication to believe without question the biblical words flatly and to do otherwise is to dismiss the whole of Scripture.

Finally a Hebrew Bible for Kindle and Nook

I’m About To Be In Trouble Again

6 Replies to “Peculiarities of the Appalachia Hermeneutic: Snake-handling and Literalism”