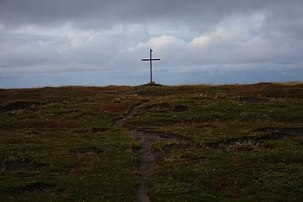 My last post stirred a discussion that made me think. These thoughts are the result.

It is fair to say that Christian tradition has vastly dictated right practice of our faith can only stem from right beliefs within the faith. When I questioned that understanding by suggesting that there must exist a balance between the two – that one doesn’t necessarily spring from the other – the reaction was to recoil to the previous and most widely accepted understanding of orthopraxy coming only from orthodoxy.

Since, I have not been able to shake the idea that our traditional understanding could use a tweak – and necessarily so.

To demonstrate my thinking, I will use three real-life examples where I think things cannot be seen as black and white.

The first example is that of an atheist who has been attending my church. He does this for his family. I couldn’t tell you what he thinks while he is there, but he comes. He participates in the life of the church and does anything else anyone else in the church does. Now, if he were to develop in the faith over time, so that he lives faithfully both in orthodoxy as well as orthopraxy, wouldn’t his right belief have flowed from his right practice.

Second, I am currently walking alongside a family who lost their father last fall. There is doubt, fear, and anger. Their faith – what we would otherwise call orthodoxy – is shaky at times, and that’s just what they’ll admit to me. However, they remain connected to each other, the church, and to the support system offered to them through the church universal. I see very little evidence that they won’t ultimately remain faithful once the storm subsides. Is this not orthopraxy giving birth to orthodoxy?

Thirdly, many who will read this know that I lost a son a little less than three years ago. It wasn’t a complete surprise, but that doesn’t make it hurt any less – and we hurt plenty. In the immediate wake of his death, I would say, “Our grief is strong, but our faith is sure.” In hindsight, I knew I was saying that in hopes it would become true, not because it was true at the time. You see, I was a functional atheist for a few months in 2012. Three weeks on from Carter’s death, I had to get back in the pulpit. That was the hardest sermon I’ve ever had to write. Mainly because I was still hurting from the death of my son, but also because I was unsure I could believe some or all of the things I was saying. Eventually, I reconciled myself back into the reality of my faith. However, I was literally faking it until I made it. My practice was the thing that eventually brought me back to my belief.

These examples are anecdotal, of course, but don’t they speak to the issue all the same?

At the very least, I believe we must understand the relationship between these “orthos” as existing along a spectrum, mainly because the linear equation we have traditionally used doesn’t account for reality. Most of the time, ones current state will hover around the center of the spectrum. When things go wrong, we may find ourselves at either end of the spectrum. However, we should eventually work our way back the the center, where there is a healthy balance between our faithful belief and our faithful practice.

I know we like cut-and-dry, but the world in rarely that. In order to survive this world, we should learn how to exist in that tension.

I, again, look forward to your thoughts.

My answer to who killed Jesus

4 Replies to “Orthodoxy FROM Orthopraxy”