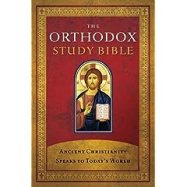 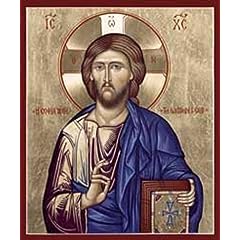 Not being Orthodox myself (although maybe orthodox), I became interested in this translation for two reasons:

Late last year, I received the New English Translation the Septuagint, but alas, it was difficult to carry two bibles to Church, so when I heard of this one coming out, I was excited, and I have not been disappointed. Not only did it have the distinction of having both (Greek) testaments in one bible, but it included the Deuterocanon along with notes that introduce people to various ‘Church Fathers’ up to the Great Schism. Plus, unlike the NETS, the Orthodox Study Bible (published by Thomas Nelson) is publicly readable, with less stilted language.

For the Septuagint, the Committee used Rahlf’s critical edition of the Greek text, which is what the NETS used, however, they further used Brenton’s 1851 translation and the New King James Translation as a backdrop. They readily used the NKJV in places where the Hebrew and the Greek matched. They did, however, use the canonical order of the Old Testament According to the Seventy, first published in 1928. Of course, using the Septuagint creates problems for those who have constantly read the English translation of the Hebrew, especially in the Psalms and Jeremiah. Few Christians outside of the Orthodox tradition, or scholarly field, know that at times there is, at times, a great difference between the text of the Septuagint (LXX) and the Hebrew (MT).  The OSB helps by providing a chart of the differences in chapters and verses.

It uses NKJV renderings where the Masoretic text of the Hebrew is the same as the LXX text, much like the NETS uses the NRSV for an air of familiarity. (It should be remembered the NKJV has faced criticism for the stilted language.) The introduction states that “he Old Testament text presented in this volume does not claim to be a new or superior translation.  The goal was to produce a text to meet the Bible-reading needs of English-speaking Orthodox Christians.” The New Testament is taken from the New King James Version (NKJV), and like other NKJV’s, the variant readings are listing in the footnotes. They have succeeded on this and in providing the LXX to English speaking Christians familiar with the language of the KJV, NKJV, and the RSV; however, the Orthodox may not be so forgiving.

The use of the TR Greek is defended on the grounds that the underlying Greek text of the New Testament in the King James Version is closer to the traditional Byzantine text than that of modern critical editions. This is, for the most part, true. The editors attempt to use scientific methods in determining this, while ignoring that for the Orthodox, Scriptures come from the Church, so no explanation is needed. The section of the opening chapter, pages x and xi, which discusses the choice of text, is in fact nothing more than a slightly revised version of the preface to the Revised Authorized Version, pages vi and vii. This undercuts the Orthodox’s position of the Church as the stay of the Scriptures.

The inclusion of the Deuterocanon does not include, as the NETS does, the Psalms of Salomon which is actually referenced/contained in the Codex Alexandrinus. While I am not here to debate the canonicity of certain books, it would have been nice to have that book included in this Translation, as the representation of this book in the ancient Codex proves that someone once continued it at least near canonical, or readable. The Deuterocanon, unlike other bible versions, are printed in the canonical order of the East. Whereas the King James Version (KJV), and subsequent (Protestant) Bible versions places them in a separate section between the two Testaments.

One of the issues that I have with the Greek used in the OSB is that it does not provide for the chance to compare the recensions. It appears that the Revised Standard Version was the boilerplate for the Deuterocanon; the RSV used the shorter text. The NETS – again, meant to be the scholarly translation of the LXX – actually provides translations of both texts in parallel, as it does for the case of all such divergent texts in the Septuagint tradition: in Iesous (Joshua), Judges, Esther (giving the Old Greek and the Alpha text,) Tobit (the GII and GI texts), Sousanna, Daniel, Bel and the Dragon (all three have both Old Greek and Theodotion).

The Committee also offers a general overview of the books as well as an introduction to the Orthodox Church. I am not going to provide an answer to their assumption of continuation from the Apostles and Acts, but it is nice to have within this bible brief doctrines and explanations of the Orthodox Church. In their Introduction, the speak about Doctrine, Worship, Government, the disagreements between the West and the East, the Great Schism, Further Divisions and the modern Orthodox Church. This is not a slight against the Committee, but the history provided in these sections is often shallow and muddy; however, it is not the Committee’s mission to provide Doctoral Thesis of Orthodox History, merely to peak the interest of the reader. And in this mission, this Bible serves well.

The book overviews and is easy enough to follow, again, not giving deep insight, but pointing to the Traditions positions on the book. As with any Study Bible, the OSB have footnotes throughout, but more often than not, it refers to an ancient writer, such as John Chrysostom or Vincent of Lerins, and many others. This serves the purpose well of pointing to a long history of the Orthodox, filled with commentators on every subject and every book. Of course, like all other denominationally based Study Bibles, the doctrines of the Orthodox Church are held up throughout. From the very beginning, the Trinity is pointed out, which is their primary goal as listed on the cover flap.

Interspersed throughout the translation are introduction to specific doctrines as held by the Orthodox Church. Of those doctrines that Protestants have a difficult time understanding, myself included, is Deification. According to many fundamentalist apologist, Orthodox Deification is the process of becoming a god. Instead, the OSB says that it the process of Christians becoming more like God, or as Peter says in 1.3, partaking in the divine nature. Although I am not in complete agreement with the terminology, I can understand the idea of a progression of the Christian to become more holy. This is just one example of the many areas in which the Study Bible serves to create a communication bridge with the Orthodox Church.

The quality of the bible is fair, but may present a problem in the future. I am pretty rough with mine, because it gets a lot of use. I am almost afraid to touch the pages as they are extremely thin. Another thing is the lack of cross references. I don’t really use them, but I do know of more than a few that do. This bible does not have any, which may be a turn off.

Another issue with the Bible is the commentary – it provides a great deal, but equally lacks a great deal. John Chrysostom, who could bridge the East-West divide is sorely underused as is Augustine, who could provide a bridge to the Reformed protestants. Now, it is understandable that Patristic commentary on, several of the books may be scarce (Esther, Nehemiah, etc…) , but the lack of commentary on the theological passages (such as Baptism, Godhead, Mary, Church, Pre-destination) is nearly unforgivable. Let me note, however, that having a study Bible which is unapologetically Christological in the interpretation of the Old Testament makes for a nice change and suits me fine.

Of the issues that an Orthodox might find with this bible is that although the Editors promise to use the voices of first Millenium, there are some notable excepts. We find Gregory Palamas (1296 – 1359) and Seraphim of Sarov (1759-1833) mentioned as voices, although Seraphim is not used in the notes. Further, we have to note the use of Theodore of Mopsuestia and Theordoret who were condemned as Nestorians at the Fifth Ecumenical Council.

One of the goals of this bible is to introduce the Orthodox Church to Protestants, and it does that. If you take it in that light, then the OSB accomplished more than it set out to do; however, I can hardly imagine an Orthodox being soundly happy with this bible.

Overall, the Orthodox Study Bible is a good choice; I can see it replacing several of my favorites as my bible of choice. It provides for a complete Greek to English translation of the Bible (even if flawed at places) as well as commentary from voices millennia in the past. For me, that is essential when it comes to reading the early Christian writers – Ignatius, Polycarp, Clement of Rome – who had nothing for the Old Greek.

I hope that this is not the last edition of this bible that we see, with a hope that the editors and publishers work together to fix some of the flaws.

Review of “Esther and Her Elusive God: How a Secular Story Functions as Scripture”

Book Announcement: @ivpacademic’s Paul and Judaism Revisited A Study of Divine and Human Agency in Salvation