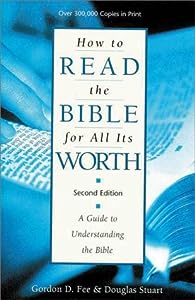 Cover of How to Read the Bible for All Its Worth

] has become one of the widely read scholars, and the more so with his new book on Revelation (which I really, really, want). Anyway, here is a portion, read the rest at link below.

Among evangelicals, few have looked to Pentecostals for in-depth biblical teaching. A commonly held view has been: “Pentecostal theology? What’s that?”

Says Fee: “In defense of my Pentecostal tradition, we grew up with an outpouring of the Holy Spirit that swept the world like a storm. For many Christians, it was ‘Father, Son and Holy Book.’ They would say, ‘I believe in the Holy Spirit,’ but that was it. The Pentecostal movement brought people into a direct encounter with the living God.”

So, do Pentecostals need Bible scholars?

Fee adds: “Having a Ph.D. has not stopped me from being Spirit-filled.”

Fee is a sought-after author, and many Christian publishing houses want the rights to his books that help readers delve deeper into the Word. His most popular, How to Read the Bible for All Its Worth (co-authored with Douglas Stuart), is in its third edition and has sold more than 1 million copies. Perhaps the reason for its runaway success is Fee’s simplistic approach. “The worst enemy of Scripture is the numbers and verses,” Fee says. “Get rid of the numbers, and you can read the Scriptures.”

Fee admits to being amazed that no Pentecostal had theological books published before him. Students would listen to his lectures and ask, “Where can I find this published?” Realizing such a book did not exist, Fee decided he would fill the gap. Since the 1970s, he has written numerous books examining the New Testament and, in particular, the apostle Paul’s teachings.

The Personal Ordinariate of the Chair of St. Peter