Discussion on the Atonement 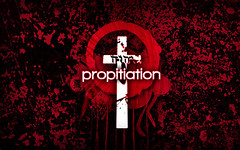 There are many different views on the Atonement, the theology behind the Cross. With these views come the natural inclination to make them inerrant and unquestionable, meaning that when you start to examine them, the loud charge of heresy! is uttered, with constant attacks from the various camps. (Newtaste has written about this thoughts a few days ago)

From here, but these are the pieces of the article that I am sharing for the moment:

Ransom to Satan: This view sees the atonement of Christ as a ransom paid to Satan to purchase man’s freedom and release him from being enslaved to Satan. It is based on a belief that man’s spiritual condition is bondage to Satan and that the meaning of Christ’s death was to secure God’s victory over Satan.

I don’t consider this one biblical, to be honest. It places God as almost a subservient position to that of Satan. God is not a customer of Satan, you know.

I like this one, but it is a little too pat for my tastes. I do think that the Atonement involved the act of obedience, as we see that with the New Adam, Christ, we see in Mary the obedience to God which Eve should have had. With that said, I do not think that it was all about obedience to God which brought about the Atonement. While I think that Christ lived the life that we should live, and was obedient as an example, etc… my concern, I think, is that this view seems to state more on the how than the why, if in fact those two things can be separated.  In other words, I think that this view tends to tell how Christ lived and died rather than the why, but I may be drawing a distinction where there is none.

Dramatic Theory: This view sees the atonement of Christ as securing the victory in a divine conflict between good and evil and winning man’s release from bondage to Satan. The meaning of Christ’s death was to ensure God’s victory over Satan and to provide a way to redeem the world out of its bondage to evil.

Mystical Theory: The mystical theory sees the atonement of Christ as a triumph over His own sinful nature through the power of the Holy Spirit. Those who hold this view believe that knowledge of this will mystically influence man and awake his “god-consciousness.” They also believe that man’s spiritual condition is not the result of sin but simply a lack of “god-consciousness.”

Moral Influence Theory: This is the belief that the atonement of Christ is a demonstration of God’s love which causes man’s heart to soften and repent. Those who hold this view believe that man is spiritually sick and in need of help and that man is moved to accept God’s forgiveness by seeing God’s love for man. They believe that the purpose and meaning of Christ’s death was to demonstrate God’s love toward man.

Okay. I like bits of this as well. It lacks points which I feel is important, such as the act of obedience. Further, the redemption of humanity, or perhaps Recreation. I do however see and agree that the Atonement is the prime example of God’s love towards us. Again, supreme merit, but not sure it goes far enough.

Not so much because it removes the necessity of the Word from the redemption. It simply doesn’t sustain itself under the scope of the Wisdom Tradition.

Commercial Theory: The commercial theory views the atonement of Christ as bringing infinite honor to God. This resulted in God giving Christ a reward which He did not need, and Christ passed that reward on to man. Those who hold this view believe that man’s spiritual condition is that of dishonoring God and so Christ’s death, which brought infinite honor to God, can be applied to sinners for salvation.

Where is the Scripture for this one?

Governmental Theory: This view sees the atonement of Christ as demonstrating God’s high regard for His law and His attitude toward sin. It is through Christ’s death that God has a reason to forgive the sins of those who repent and accept Christ’s substitutionary death. Those who hold this view believe that man’s spiritual condition is as one who has violated God’s moral law and that the meaning of Christ’s death was to be a substitute for the penalty of sin. Because Christ paid the penalty for sin, it is possible for God to legally forgive those who accept Christ as their substitute.

No. It has no room for the reconciliation of the world.

Penal Substitution Theory: This theory sees the atonement of Christ as being a vicarious, substitutionary sacrifice that satisfied the demands of God’s justice upon sin. With His sacrifice, Christ paid the penalty of man’s sin, bringing forgiveness, imputing righteousness, and reconciling man to God. Those who hold this view believe that every aspect of man—his mind, will, and emotions—have been corrupted by sin and that man is totally depraved and spiritually dead. This view holds that Christ’s death paid the penalty for sin and that through faith man can accept Christ’s substitution as payment for sin.

No, as while some of it is Scriptural, it has no room for reconciliation, the moral example, obedience, and the Great Love of God. Further, I don’t buy the ‘totally depraved’ notion nor the ‘spiritually dead.’ If we were truly spiritually dead, then we would not have need of the ‘restless heart’, nor would we constantly rebuild the Tower of Babel in order to find a way to God. I still prefer Athanasius’ view, it seems.

Note, these are my beginning thoughts, and we will continue through them. I am in favor of learning everything I can about these views, and would welcome warm discussion.

Quote of the Day: Stuart James

The Biblical Doctrine of Hell – Thayer, 1855

5 Replies to “Discussion on the Atonement”